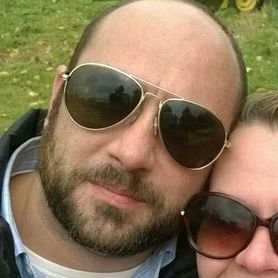 A network of anti-fascist activists from coast to coast have obtained the chat logs of a neo-Nazi organization calling itself “The Base.” Anti-fascists infiltrated the Base in order to investigate and identify its members and disseminate this information to the public.

In an ongoing series of articles, the coordinating anti-fascist network will publish revealing information about this group and profile its members. You can follow all of these articles by following the hashtag #DeBasedDoxx.

Anti-fascism is fundamentally a localized movement of working-class peoples. We are not paid for our work and we take great risks every day: not for fame or money, but to protect our communities.

Email the network at DeBasedDoxx@protonmail.com with your tips or inquiries. 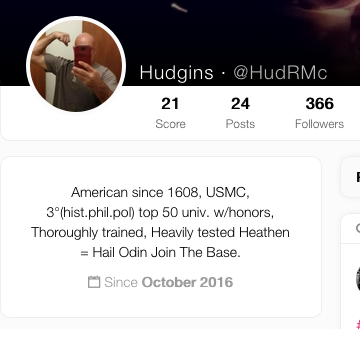 38-year-old Raymond McKinley Hudgins, a retired Marine who claims to work as a contractor, lives in Roseville, Michigan, with his wife, Virginia Beth, 32. They reside in a three-bedroom, 1.5-bathroom home on Normal Street.

But Hudgins is anything but normal. He’s a member of The Base, a white nationalist paramilitary organization hoping to balkanize the United States and divide it up into a series of white ethnostates.

Their leader, Norman Spear, is a white separatist and national socialist. He claims to be ex-military, deployed in Iraq and Afghanistan. His immediate goal is to build communal training grounds across the world. To this effect, he has purchased a plot of land in the Pacific Northwest, and plans to start training members in January.

From there, they will train in the paramilitary and survival skills needed to commit acts of mass violence and elude authorities in rural areas. As Spear tells his followers in the chats, “For now we need non-attributable actions but that will still send a message and/or add to acceleration as much as possible.”

This tactic has some precendent. Following the 1996 Centennial Olympic attack, and bombing two abortion clinics and a lesbian nightclub, Christian Identitarian Eric Rudolph spent more than five years as a fugitive living in the Pisgah National Forest. 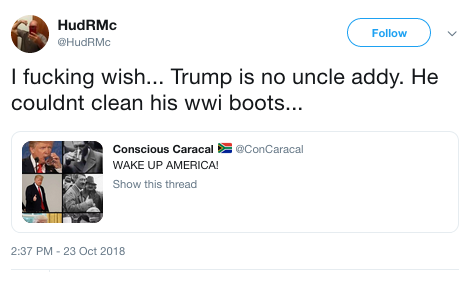 Hudgins tweets at @HudRMc, posting various racist, antisemitic, and far-right conspiracy theories. On September 20, he retweeted a user with the handle “The Zyklone Ranger,” who posted an image featuring the text, “White people can’t be racist against Jews. We hold no institutional power over them.”

In October 2018, in response to a Twitter user posting a meme comparing Trump to Hitler, Hudgins responded, “I fucking wish… Trump is no uncle addy. He couldnt clean his wwi boots….” 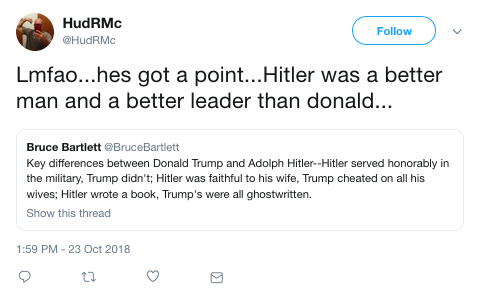 His admiration of Hitler is a recurring theme on his Twitter account. In response to another Twitter user comparing Trump to Hitler, Hudgins wrote, “Hitler was a better man and a better leader than donald….” 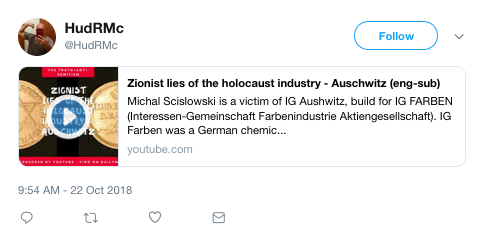 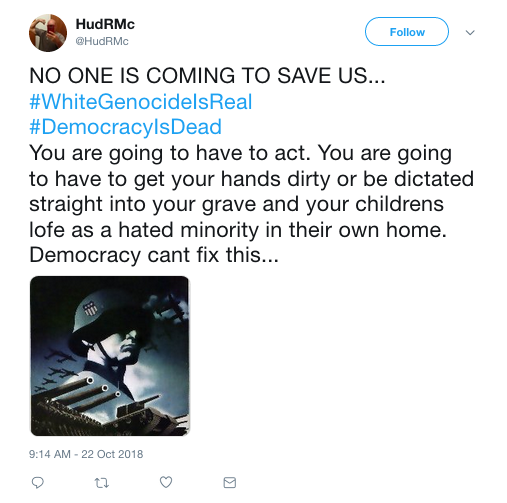 He also links to Holocaust denial videos on YouTube, retweets posts claiming Jewish people “hate white people with a psychotic intensity,” and issues calls to action for white Americans to “get your hands dirty” or face the coming “white genocide,” a racist conspiracy theory that asserts that white people are being disenfranchised and stripped of their institutional privilege.

His views are common to the alt-right in general– he considers trans people to be “mentally ill,” and refers to the LGBTQIA community as “perverts” and “degenerates.”

He also uses his account to harass trans people and the parents of trans children. 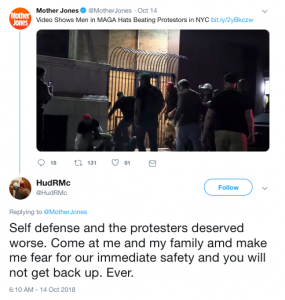 On October 14, following the October 12 Proud Boy attacks on protesters in NYC, Hudgins tweeted in support of them, writing, “Self defense and the protesters deserved worse.” 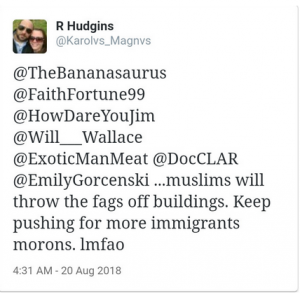 If it seems like he was behaving like a typical far-right troll in the summer of 2018– using slurs, tagging leftist activists, arguing racist and antisemitic nonsequitors– that’s exactly the point.

His views didn’t shift. He was simply given the opportunity to organize with The Base to turn that hate into a material reality. 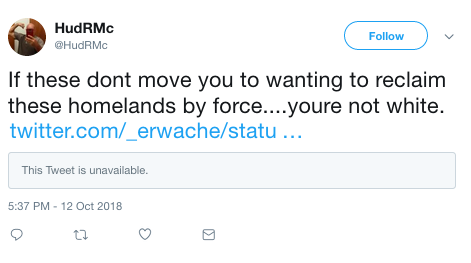 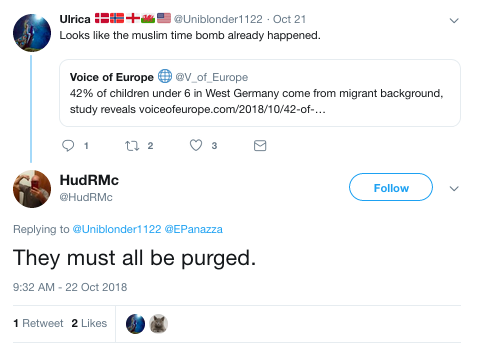 Beginning in the fall of 2018, coinciding with his membership in The Base, his rhetoric became more forceful, involving frequent violent calls to action. Below, he tells his Twitter followers to “reclaim these homelands” and, writing of the children of migrants in Germany, “They must all be purged.” 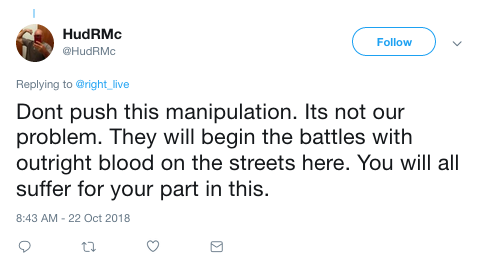 In response to a user sharing an article on the migrant caravan, Hudgins writes, “Dont push this manipulation. Its not our problem. They will begin the battles with outright blood on the streets here. You will all suffer for your part in this.”

Hudgins is a powder keg waiting to explode. When he talks about “the battles with outright blood on the streets” and says “[y]ou will all suffer for your part in this,” he is literally discussing his plans.

He left the realm of online trolling months ago and has begun organizing with The Base to train in violent tactics to enact his genocidal fantasies. Unless he is held accountable by his community, his plans for this kind of mass violence will become a reality.

This is the third article in a series exposing members of the neo-Nazi group The Base. In collaboration with an anti-fascist network that stretches from coast to coast, activists have outlined this profile of Raymond McKinley Hudgins so that the public can be made aware and take appropriate measures to make their communities safer. Email DeBasedDoxx@protonmail.com for more information on members featured in our article series or to forward tips on The Base activity. Follow the hashtag #DeBasedDoxx on social media to monitor the anti-fascist network’s reporting on The Base.